Gretel is a 6 year old Vizsla who was diagnosed with lymphoma (a cancer that arises from cells of the body’s immune system) in September, 2012. Lymphoma is a far too common form of cancer that usually results in an enlargement of the lymph nodes (glands located throughout the body), often with no other symptoms. In Gretel’s case, her owner noticed enlarged lymph nodes in her neck, but she was otherwise acting normally. The diagnosis was confirmed with a test called a needle aspiration, which was performed on one of her abnormal lymph nodes. Lymphoma is best treated with chemotherapy. There are several different chemotherapy strategies (protocols) that can be used to treat lymphoma, so we discussed these with Gretel’s owner at her initial consult.

Understandably, Gretel’s owner was very concerned about the potential side effects of the chemotherapy drugs. We discussed the fact most dogs do tolerate the treatments well, but we often see mild intestinal upset and some blood work changes (most importantly a low white blood cell count) in our chemotherapy patients, so we need to expect that some problems can occur. Also, some dogs and cats are just more sensitive to chemotherapy and can have more significant side effects, and it’s hard to predict which of our patients will have a problem before we start therapy. However, we emphasized that she and Gretel are always in control of the next treatment step, and if we ever feel that there are intolerable side effects, we can make an adjustment to the therapy. Following our conversation, we decided to go forward with the CHOP chemotherapy protocol, which is currently our most effective treatment for lymphoma. 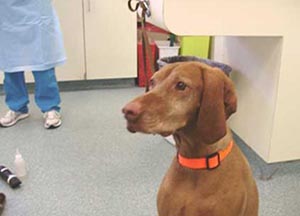 Starting the CHOP protocol meant that we would be planning to see Gretel back for a treatment once per week for 6 weeks, then once every other week for 6 more doses. She received her first treatment with a drug called vincristine on October 3, 2012. In order to be prepared for any side effects, we sent Gretel home with some medications to help if any nausea or diarrhea occurred, but she experienced no problems.
When Gretel came in one week later for her second treatment, her lymph nodes had reduced in size, but they were not yet normal. Since lymphoma is usually very responsive to chemotherapy treatments, we often see lymph nodes return to a normal size very quickly, even after only one week, so Gretel didn’t have the best possible response, but we don’t worry too much unless the lymph nodes stay enlarged through the first 3 doses. Gretel continued with her treatments, receiving cyclophosphamide and doxorubicin over the next 2 weeks with no significant side effects from either drug. On the day she received doxorubicin, her lymph nodes had returned to a normal size, which meant that her cancer was in remission. 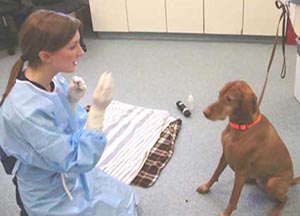 Throughout the remainder of her protocol (9 more treatments), Gretel was fortunate to have no significant side effects from the chemotherapy drugs, and although she was very nervous when we first met her, she became very comfortable with us over time. At each visit, we performed various tests, based on the drug she was scheduled to receive, to be sure that it was safe to continue therapy. If a test came back abnormal, such as her white blood cell count being too low, then we would potentially need or postpone therapy or make adjustments to the protocol. Gretel, however, always passed these tests with flying colors. We celebrated her final treatment on February 6, 2013, and she was kind enough to pose for a quick portrait afterwards.
While all of our chemotherapy stories are unique, Gretel’s experience is fairly typical for a dog undergoing treatment for lymphoma. Unfortunately, we know that we will almost surely see Gretel’s lymphoma return at some point, but for now, there is no trace of her cancer. We will continue to check her lymph nodes once per month, and whenever we do see her lymph nodes begin to enlarge again, we will sit down with Gretel and her owner to decide on our next course of action. Only time will tell how long her cancer will remain controlled, but she maintained her great attitude and continued all of her normal activities throughout her treatment, which is always our goal. 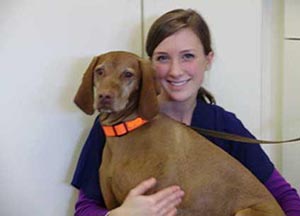