Norm,  a 10 year old Boxer mix, was evaluated on an emergency basis after he collapsed at home. On triage, the emergency clinician found fluid around Norm’s heart. The cardiologist confirmed this finding as well as a tumor on his right atrium.  The fluid was around the heart was removed which temporarily relieved Norm’s clinical signs. 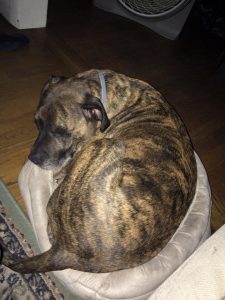 Dogs with tumors on their heart (especially the atrium) most commonly have an aggressive blood vessel cancer called hemangiosarcoma. Norm was given a grave prognosis with a considerable likelihood he would only have a few more weeks.

After meeting with our oncology department, several treatment options were offered to treat Norm including surgery to remove the tumor and the sac around the heart, radiation therapy, chemotherapy or palliative care options. Norm’s family was understandably concerned about Norm having an aggressive surgical procedure. For that reason, Norm was treated with injectable chemotherapy instead. Chemotherapy is very different in dogs and cats compared to their human counterparts. Less than 10% of veterinary patients experience major side effects from chemotherapy. We can see mild intestinal upset, some blood work changes (most importantly a low white blood cell count) and rarely hair loss (depending on breed).

The plan for Norm was to receive a chemotherapy agent called doxorubicin that is typically administered intravenously every 2-3 weeks. It was also recommended that Norm start several herbal supplements that have been shown to be helpful to treat dogs with his type of cancer. Norm tolerated the first and second chemotherapy treatment without any serious side effects. Prior to his third treatment, it was time to check his heart and make sure the drug was working well. Fortunately, there was no fluid in Norm’s heart sac and the tumor had stopped growing! Based on the good news, Norm went on to receive three additional doses of injectable chemotherapy. 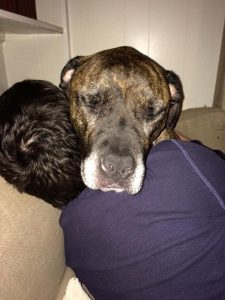 After finishing the prescribed dose of injectable chemotherapy, Norm was started on a low dose oral chemotherapy medication that can slow down blood vessel growth and certain white blood cells that cancer cells can hijack to grow and spread. Repeat ultrasounds of the heart during the low dose chemotherapy medication showed minimal changes in the size of the tumor and no recurrent fluid. Norm did well for an additional 3 months (approximately 7 months after his initial cancer diagnosis) and had an excellent quality of life.

While all of our chemotherapy stories are unique, Norm’s experience is fairly typical for a dog undergoing treatment for cancer. Unfortunately, the majority of cancer we treat is manageable but not curable. After a long and courageous battle, Norm was put to sleep almost 9 months after his initial cancer diagnosis. Our goal is always providing the highest quality of life for as long as possible for all of our patients. We tailor our treatments to each individual case to ensure the treatments meet the needs of the patient and their human family.

A Word from Norm’s family:

Whenever we brought Norm in for an appointment they treated him like he was the only patient in the hospital!  They all fussed over him to make sure he felt loved and secure during his visits.  While Norm, like most dogs was nervous coming in for his appointments, as soon as he was with the staff he would give kisses which made us feel better!

We were told right from the beginning that most dogs with heart-based masses and pericardial effusion don’t often have much time left despite their best efforts with treatment.  We had 7 wonderful months with Norm thanks to Dr. Alexander and the staff at OSVS.  The extra quality time that we got to spend with Norm was a true gift. 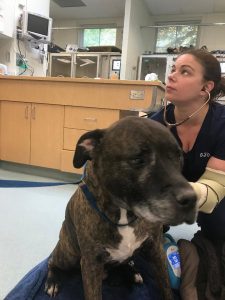 On our last visit to OSVS, we were met with so much compassion and empathy from the staff and Dr. Alexander.  Everyone that had worked with Norm took a moment to say their goodbyes.  Looking back on the moment, it is so apparent that Norm was in the best hands when he was at OSVS and that he was truly loved by the staff.  We have so much gratitude and appreciation for Dr. Alexander, the oncology technicians, as well as the ER staff and doctors that took such amazing care of our Norm.  -James F. and Michael W.